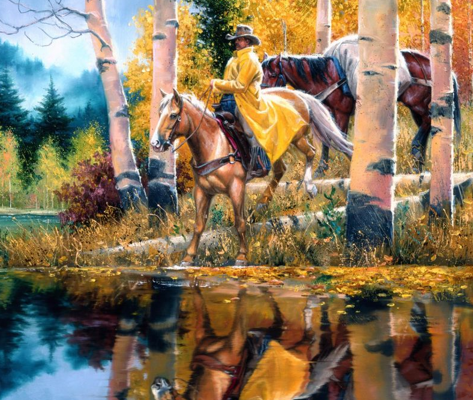 A picture paints a thousand words

Like you, I have no idea who “they” are, or I would reach out and have a conversation. Because more and more I’ve been wanting to challenge that assertion lately. You see I recently started following a western artist named Jack Sorenson who creates works of art, like the post image, that I simply couldn’t imitate, even with a million words.

Oh, sure I could tell you there was a cowboy riding a horse. But you wouldn’t get the image in your head of this cowboy, riding this horse, in this scene. But this blog is about data and data visualization, I’m not an art critic. So where am I going with all of this?

Well I can assure you that’s the same thing Lyndsee Manna, with Arria NLG, wondered 3 weeks ago. At the last minute, before a Fireside Chat we were scheduled to do together about Data Literacy and Data Storytelling, I had emailed her the photo, along with 5 words that Jack had shared along with the painting. Because one of the rough outline points we were set to discuss was the differences between Data Storytelling through Visualization and Written Storytelling, as well as how they complimented each other. (In the event you are curious you can watch our chat on demand)

If you aren’t familiar with Arria NLG their extension for Qlik Sense produces written words that describe a set of dimensions and measures. I bring that up, because others in the market have asserted that dashboards are dead and that all people need are words. Hence, setting up a sort of competition between the two forms.

Lyndsee and I see things completely differently than most. You see, we fully agree that not only do written and visual forms complement each other, we think they magnify each other.

How is that possible you ask? As a bit more, background the reason I follow Jack is that as breath taking, awe inspiring and amazing as his paintings are, he doesn’t stop with the paintings. He always adds a small story, and you know this Qlik Dork loves storytelling. When he posted this painting, it was no exception. He wrote a sentence that ended with these 5 simple words that just floored me: “when the aspens were singing.“

Alone, Jack’s painting makes you want to view/study/marvel at it. Especially if you have a soft spot for the nostalgia of the west introduced to me via my late father. Yet with very few words, Jack transformed the painting into something I wanted to hear/feel/experience, not just look at. He made me want to ACT UPON and not just LOOK AT the painting. His brief words helped me EXPERIENCE the painting and not just SEE it.

You see, Jack is as much an artist with the keyboard as he is with the canvas. Those two skills not only complement each other, they magnify each other. That’s where I came up with the term Data Artistry. To me, at least, the phrase transforms both Data Visualization and Data Storytelling in written form, from being just science to being about art.

Recently a Data Visualization guru Chris Tauber asked for input for an article he was writing for Data for Execs Magazine. I gave him my lifelong, fundamental philosophy on how to present data for executives:

“Don’t give them the stats. Give them a reason to get out of the chair and ACT.”

Most of the time when I say that, that people ask … “How do you do that?”

For the past 6.5 years I’ve blogged about both Data Visualization and Data Storytelling. I actually have them as 2 distinct categories for my posts. But realized after my quote for Chris I realized that I had never tied them together and made it easy for others to “get it.”

So for the record let me by clear … I believe that Data Visualization and Data Storytelling go hand in hand, just like Jack’s painting and his words. The goal of combining them is to move the audience to acting, not just viewing or reading your “art.”

Give me a real-world example

I’m guessing that you are intrigued by this new term, but are likely asking yourself if this can really be done with data. I assure you, it can so let me share something I did along these lines in the past.

Two and a half years I wrote a post called Actionable Intelligence in which I described something really boring to many … a single health system measurement called length of stay. That measure is just what you think, the time a patient stayed in the hospital. In the post I documented the why and how, of helping executives act on a boring measure that was .33 days over the expected target.

Like you, they would never see .33 in a KPI and get out of their chairs and act. It’s just a “stat.” A miniscule value at that. Instead I suggested doing what Jack does. Show them, and tell them. So, I used this image of a cute little kid leaving the hospital with his mother. Why? Because it humanizes the 0’s and 1’s.

In the post I talked about converting the .33 to other values, financial ones to give them a story that was relatable to them. Finally, I closed my KPY, with a few simple words “Our 8-hour delay means that this child’s father had to go to work and can’t welcome his son home.”

You be the judge. Do the image and the words magnify each other such that you would want to jump out of your chair if you were a healthcare executive?

Want another example? Stay tuned as I will have a sequel to this post. Hopefully, I will be more creative in titling it and won’t just call it “Data Aritistry 2.” But who knows how much Mountain Dew I may have that day. Regardless of the title, I will show real data visualizations, from real data and not just a KPY with a heartwarming piece of clipart.